Many sports require you to make weight or diet down before competition - the are lots of ways to do
it and lots of info out there about dieting... but there isn't much information out there about what to do after the competition and if the post competition phase is not managed well, it can lead to rebound weight gain that can be much more difficult to lose the next time you diet. 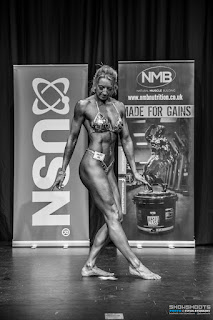 Bodybuilding is really an extreme yoyo diet. If you haven't done it yourself, you probably know someone who has 'gone on a diet' with severe calorie restriction, to lose weight for an event, only to return to their old habits as soon as 'hit weight' or give up because its too unrealistic to maintain longterm. The woman usually blames herself and after piling weight back on... usually more than they had to begin with, they go on another diet and start the process again, this goes on and on and it always gets more difficult. But bodybuilding isn't really that different, we set a date, go into 'prep' and diet down to the level of conditioning required and then most people immediately binge on the foods we craved, go straight back to 'normal eating' or go on a forced 'bulking' phase and pile on fat in the same way as the yoyo diet woman... but its ok as we are 'off season' But when it comes to the next competition, the weight often won't come off the same as it did the last time, so the diet gets stricter and the process starts again, but with worse consequences the next time and so it continues. The other situation is the women who have dieted for competition, but are now too scared to eat more for fear of gaining weight, rebounding or losing that figure they worked so hard for, so they end up staying on their competition diet indefinitely which is unsustainable and wont help them improve for next season....  With the huge increase in women competing in bodybuilding competitions in the last couple of years, I think we are really only just beginning to see how this cycle of extremes is affecting women.

So what is going on? Basically the body is clever and when it thinks its being starved, it economises and uses less energy to do anything, lots of chemical and hormonal stuff starts going on that basically means your body wants to store food - not burn it off so you plateau and have to go a bit stricter to get the diet moving again. So you gradually diet down to the point you hit your goal. At this point the body in most peoples cases, has such an economy of effort now that the metabolism is rock bottom, and the problem is this, if you increase back up to your pre prep diet too quickly, the body will still want to store all the energy it consumes as it is so economical it doesn't need all those calories.

This is where reverse diets come in- for two reasons, firstly to prevent post competition rebound weight gain and also for your health.

Rebounding- reversing your diet gradually back up to a maintenance level can help get your metabolism working better, you are less likely to store the extra calories in a rebound fat gain. As the metabolism is restored, you should be able to cope with more calories while maintaining weight. If your goal is to gain muscle, you would continue to increase until consuming a little more than expending, but not so much extra that your body just stores more fat... just making the next diet harder.

Health- Its not wise for women especially to stay at low bodyfat levels all year round, or to stay calorie restricted for prolonged periods of time. Why? Well when the body fat is low, your hormone levels can be affected, which in turn can lead to problems with bone density, menstrual cycle- and restricted calories can lead to malnutrition which in turn can lead to deficiencies in vital vitamins and minerals, more hormone imbalances, metabolic problems, and the female athlete triad (eating disorders, bone density issues and loss of periods) So its really important not to stay restricted or at low body fat levels for too long. Most women lose their periods at about 12-14% body fat, at this point your body is basically protecting itself as the body is clever and knows that you don't have enough body fat for reproduction and health, so its starting to shut down the bodies ability to reproduce. Then theres the psychological effect of all this..... depression, further disordered eating, body image issues etc etc...

So what can be done to help prevent all these potential issues? What is a reverse diet in reality?
In simple terms,
1. you go back to pre peak week diet (if you changed things peak week)
2. then gradually increase calories over a number of weeks, assessing weekly how much fat  you are gaining. If your weight drops, stays stable, or is increasing slowly, you increase calories - if gain too much - you hold steady for another week, if still gaining, maybe pull back a few calories until weight / fat stabilises.
3. How far do you reverse to? Well this depends on your goals, if want to gain muscle you would want to be in a slight calorie excess, if just want to maintain a healthy offseason figure, then you increase until you hit a healthy long-term body fat % and maintain there.

Reversing can take a lot of will power, you may have been dieting for so long that you don't want to carry on any longer, but after a few days of eating junk food, you may find it a relief to have some structure back in your diet- I find it easier on the reverse than during prep, why? I think its psychological, because I know I can have the odd treat - just knowing that means I don't want it so much... where as on prep, you just want that biscuit because you cant have it :D

So if your competition season has just finished, seriously consider a reverse diet before Christmas season kicks in and it becomes tougher! If you are struggling with post competition diet, seek help from a coach, many women employ a coach during 'prep' but then go it alone after and without some guidance and with no imminent goals, its easy to drift off and lose track of your goals. The off season is where you can make the biggest changes for next years comps, so make the most of it! For info on my online coaching check out my profile Here